27 September 2012; Nottingham, UK: Copley Scientific has launched the Plume Temperature Tester PTT 1000, a high precision instrument for measuring the plume temperature of Metered-Dose Inhalers (MDIs) and nasal sprays. The PTT 1000 is the first instrument on the market that can reliably measure plume temperature during dose delivery, to support determination of the ‘cold freon’ effect – the chilling sensation that inhaler users often experience. Since this effect can directly impact the consistency and efficiency of drug delivery, the new tester is particularly useful for those seeking to demonstrate therapeutic equivalence or to develop softer, warmer plumes with improved patient compliance rates.

The widely recognised ‘cold freon’ effect is due to the high velocity blast and subsequent evaporation of liquid propellant that impact the back of the user’s throat during drug delivery. Since the effect is a function of both aerosol spray force and plume temperature, Copley Scientific offers the PTT 1000 alongside the Spray Force Tester 1000, an instrument that measures the impaction force of delivery. Together these provide a combined solution for complete quantification.

In certain instances the ‘cold freon’ effect can result in the patient aborting the inhalation process and is therefore a significant cause of inconsistent drug delivery. As a result, this effect is specifically given as an example of a criteria that might be required to substantiate in vitro therapeutic equivalence in EMA guidelines for orally inhaled products (OIP) (January 2009).

With an internal geometry identical to that of the standard USP induction port used for all orally inhaled product testing, the PTT 1000 incorporates a series of four thermocouples that measure a precise temperature profile of the plume at different distances from the actuator. A data acquisition system under the control of an associated PC ensures efficient data capture and display, and the thermocouples are easily removed for cleaning. The new tester can be directly connected to a Waste Shot collector or Dose Uniformity Sampling Apparatus for streamlined integration within existing test set-ups.

For further information on the new the Copley Plume Temperature Tester PTT 1000 please go to: http://bit.ly/COPCSC 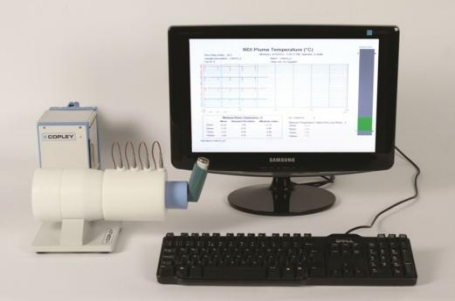 Have a question? Our friendly and experienced team are here to help.